Following news that Sonic Youth are going on (possibly indefinite) hiatus, we asked readers earlier this week to write about the band.

We received an overwhelming number of quality responses. Here are a few of the pieces, but we'll post the rest to this specially created Tumblr – Sonic Youth and Me. We'll continue to update it, so if you'd like to contribute, email a short piece to adam.boult@guardian.co.uk with the subject line 'Sonic Youth'.

We'd also like to know which is your favourite Sonic Youth album – let us know by voting in the poll below.

I still remember the moment I first heard Sonic Youth. I was a plucky 17-year-old with a blazer full of indie band badges who, with a CD rack full of Iggy, The Clash and The Velvet Underground, thought I knew it all. But as the chords chimed and clattered their way through Daydream Nation, I realised I had much to learn.

Embarrassed that I'd never heard a band that could make such a magnitude and symphony of noise, I quickly collected every studio album, then the rarities and then the snobs-only bootlegs and noise albums. Despite forking out hundreds of pounds on Sonic Youth, I'll still be forever indebted.

I met Thurston Moore at The Scala, London, in 2009 ahead of one of their most delightful recent UK gigs, packed with fan favourites like Hey Joni and Kool Thing as well as songs from their then-new album The Eternal, which still sounded as youthful as their moniker, despite it being their 16th. As I shook his gargantuan hand with mine, I had no idea what to say to my idol and muttered something throwaway like 'thank you for the music'. I hope, despite the seemingly indefinite hiatus of Sonic Youth, we can meet again so I can offer something more eloquent and truly express what Sonic Youth has meant to me.

Sonic Youth taught me, and us, that a guitar isn't just six strings and a fret board; it can be a wailing banshee or a starling singing its morning song. They taught us that age is no barrier to breaking into music. Sonic Youth has been there with me through my achievements, travels and moments when it really would take a teenage riot to get me out of bed. And if they've taught me anything, I know that a hiatus just means they are readying a comeback with more surprises than 2000's NYC Ghosts & Flowers. Thank you for the music, Sonic Youth. Sorry Thurston, I've done it again.

Given their renowned penchant for shying away from normalcy, it was natural, I suppose, that they should be supporting the, um, Chemical Brothers. A hazy heat had fallen down and the field which would later pen in cocaine-vacuuming dance-heads and fist-pumping cats of the night was for now populated with bespectacled indie-kids and those of us who crave the chaos of lost noise. Memory plays around with accuracy, but they entered late afternoon. A polite applause and the ubiquitous lone hollers were injected by a gaggle of school-girls who, upon learning harmless Californian-rockers Phantom Planet were cancelled, sighed and left. Funny, isn't it, those moments immediately succeeding a band's entry onto the stage: usually, amps and peddles are toyed with, mics adjusted, and the crowd is silent and oddly awkward. Not this time. The assault was instant, violent, and, in a funny way, almost cruel. Ah, SY!
What followed, of course, was nothing new. Thurston shimmied into a circling motion, as he does, before dangling upside down on the stage's frame-work. Kim jigged and jived as only the eternal 18 year old inside her would, and Lee, the practitioner of the brave and the bold, stood cool and continued to feed the spastic noise, as we trembled and welcomed unto us the harm it must surely bring. And Steve was somewhere, too – I think. The set-list escapes me now, and somehow what was played didn't seem to matter. Sure, Schizophrenia was in there; so too a host of songs from the album they were touring: Sonic Nurse. It perhaps only lasted 50 minutes. Or maybe it was 20. Like their music itself, surreal soundscapes of whirling feedback married with an indefinable beauty were reached. Everhot 204 deluxe manually. Sonic Youth's island, like the city of their origins, is unearthly, incomparable and glaringly alive. After, we footed hesitantly back onto earth, and even The Chemical Brothers seemed dull.

Sonic Youth: the band that typified a generation. For three decades, greasy-haired teens in moth-bitten jeans have cherished the screeching wail of feedback resonating off their bedroom walls.

As an awkward adolescent, my connection with The Youth began when I borrowed the iconic Goo album from the suburban library near my house. Soon I was hooked on the liberating howl of guitars - a crescendo of noise. As a young woman trying to find my place in the world, Kim Gordon was an
ideal role model. The gutsy bassist oozed sensuality as she purred songs of seduction, belted out angry anthems, and explored issues of body image. These tracks made thousands of us young women feel less alone. Thurston Moore was the cat's pajamas, for youngsters like me it was a new experience to hear words like 'bourgeois' and 'superdope' used in the same breath. Steve Shelley was that cool drummer guy who nobody knew much about, but all agreed he'd be the perfect model for a Ray Ban commercial. And then, there was Lee Ranaldo. Charming in his distinct poeticism, Lee was the Allen Ginsberg of the nineties.

Ever since my initiation into Youth culture at thirteen, Sonic Youth remain my religion today at twenty-seven. My home is adorned with sacred artifacts like old vinyl and dog-eared ticket stubs. I have worshipped live, collected blurry D grade bootlegs, and hand made buttons with neon markers. As the magic softly fades amidst rumors of an indefinite hiatus, I am grateful to say I was raised by these four strangers – people who have impacted my life in profound ways, yet whom I barely know. Kim, Thurston, Lee and Steve, thanks for defining thousands of teenhoods around the world.

'Daydream Nation', the album that is often cited as the band's greatest effort, was the first of theirs I heard. From the stoic beginnings of fan favourite 'Teenage Riot' to the caustic climax of epic three-parter 'The Wonder', the album struck me in a way I wasn't expecting. I relished in the abrasive noise break that bridges 'Silver Rocket', and was taken aback even further at the introduction of the rather sullen if strangely poignant 'Providence'.

But as great an album it is, Daydream Nation barely reports on the band's vastly alterable creative output. Fuzzed-up bass lines and irreverent words of Sonic Wisdom define the expensive-sounding 'Dirty', a record that finds itself living in great tonal opposition to later works like the spacey 'A Thousand Leaves' and darling of controversy 'NYC Ghosts & Flowers'. They're a band that confidently conjures up moments of flurried aggression alongside a unique brand of improvised majesty--a trait that is best exemplified by the awe-inspiring closer 'The Diamond Sea' from the album 'Washing Machine'.

See All 13 Rows On Www.allmusic.com

Even as the group now stares into the face of potential finality, it's also worth noting that the last ten years alone have been more than kind to the New York-bred guitar benders. My personal favourite of their albums, 2002's 'Murray Street', typifies everything great about Sonic Youth: it's part gentle, part manic, part cool, part quirky, part rocking and even part referential. Both 'Rather Ripped' and 'The Eternal', their last two records, command nothing less than an energetic free-for-all and very rarely feel the need to stop and come up for air. 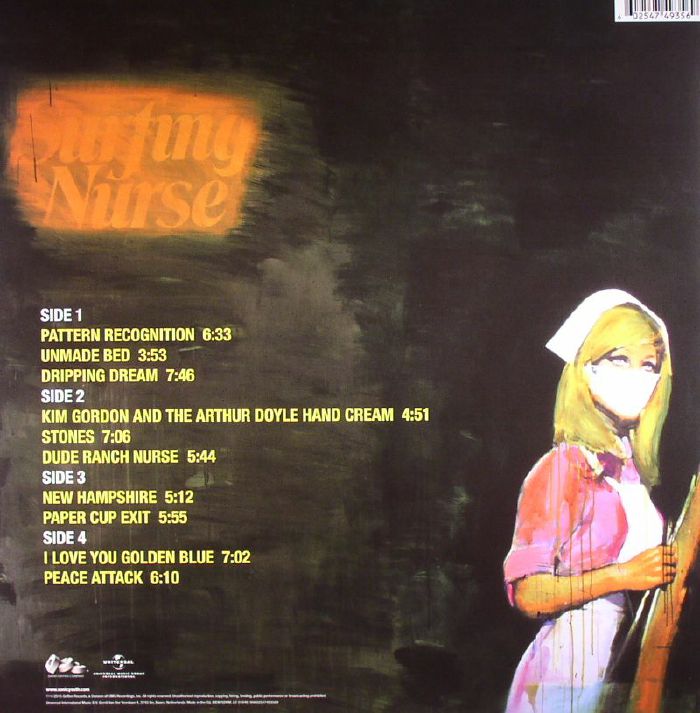 Whatever happens next, that ideal will surely be Sonic Youth's legacy: an EVOLution of creative desires fuelled by the never-ending need to kick some serious six-string ass along the way.

This poll is now closed