I'm an engineer at a small manufacturing company. I do our general and database programming so this stuff usually ends up in my lap. I have a few computers that run manufacturing equipment. They have various sensors that use USB and serial ports to communicate with pyrometers, photodetectors, etc. It took days to get the computers properly connected to sensors and PLCs. We need to run these tools every day or every other day so if I had a problem with them, we'd like to get them back up and running within a day or maybe two. 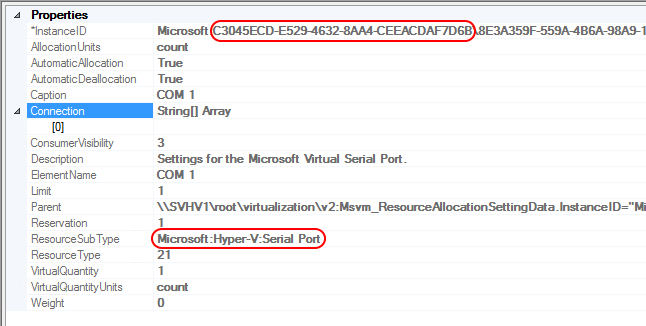 These computers are running windows vista and windows XP. I'd love to be able to back them up in a way that is hardware independent so that I can just back them up and after the motherboard fails, I can reinstall them to a virtual instance of windows and start running again with some configuration. If doing this means that I have to set up fresh instances on new machines and have the virtual PC files on my server ready to install on any PC that would be manageable.

To work around this problem I thought I could use a virtual machine in Hyper-V or VirtualBox that could map a serial port to a named pipe. Here's where I'm getting confused. It would seem like what I need to do is somehow serve my COM1 port to a named pipe on my laptop. I could then point the virtual machine to that named pipe. Unlike many other virtualization solutions, it's not particularly easy to connect a Windows 2008 Hyper-V guest to its host serial ports. Perversely, there are settings to connect the guest COM ports to “named pipes,” but there's no way on the host to connect COM ports to named pipes. (It appears that this.

Is running a virtual instance of windows using Virtual PC or Hyper-V a good solution to this sort of problem? Ideally, I could drop the virtual pc file on a new pc and RDP to the windows xp or vista instance from the host computer, do some configuration and be good to do. Any dvd cloner platinum for mac crack torrent full. Is this a good use for Virtual PC/Hyper-V?

If not, is there something else I should be looking into? Thanks for your help.

I've setup Linux Mint x64 in Hyper-V as a Generation 2 Virtual Machine on my Windows 10 desktop. I would like to attach a USB->Serial converter (FT232RL) to the VM, so I can program and debug embedded hardware. In Windows the FT232RL shows up as a 'USB Serial Port (COMx)' and is working fine. When I'm using VirtualBox I can just attach or detach the COM Port from the VM, and everything works just fine.

Generation 2 VM's in Hyper-V don't have the COM ports/named pipes show in their settings, unlike generation 1 VM's, so I'm not sure how to access the appropriate settings. There is an article here (more details) that shows what I want to achieve, except I'm using Linux instead of Windows as my guest OS.

So, how would I go about setting this up? I've already had a look at setserial in Linux, but so far haven’t arrived at a solution.

Browse other questions tagged linuxvirtual-machinehyper-vcomnamed-pipe or ask your own question.